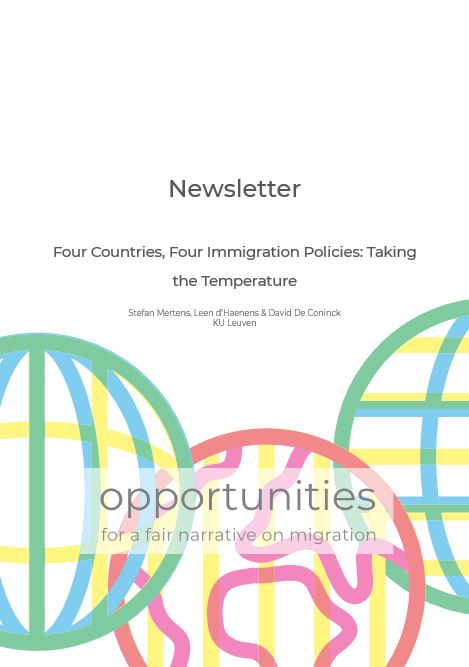 The focus of the OPPORTUNITIES project is on four adjacent European countries whose specific situations make for an interesting discussion of migrant and refugee policies: Germany, Austria, Hungary, and Italy. In recent years, Germany has taken the lead in refugee hospitality, with Chancellor Angela Merkel famously asserting on August 31, 2015 that her country would 'manage' to welcome an unlimited number of refugees ('Wir schaffen das'). This might have been expected since Germany has been largely accepting of migrants (Talò, 2017)—and indeed it is by far the European country that took in the most asylum seekers during the 'migration crisis'. On the other end of the spectrum, we have xenophobic, refugee-averse Hungary led by strongman Viktor Orbán (Vidra & Fox, 2012). While Austria is mostly a country of transit for refugees on their way to Germany, it has absorbed a contingent equal to 1% of its population. Italy also has had a significant influx of migrants, but primarily as a gateway to Europe.

Survey data was collected in these four countries from the end of May to the beginning of June 2021. A total of 6065 people were surveyed—slightly more than 1500 respondents per country. The usual socio-demographic variables were taken into account when selecting our respondents, with men/women, young /older and highly educated/less educated ratios closely matching those in the countries studied.

A tool we used was a 'sentiment thermometer' measuring scores from 1 (very cold) to 10 (very warm). We made a terminological distinction between three outgroups: immigrants, refugees, and Muslims. For Hungary, a borderline autocracy, sentiment towards all outgroups scores low, with Muslims coming off worst with a score of 3.61—lower than refugees (4.42) and people described as immigrants (4.07). But sentiment towards Muslims is also rather negative in Austria (4.13), Germany (4.55), and Italy (4.71), which shows that Islam is perceived as fundamentally problematic in Europe.

Why do Italians show a more positive sentiment towards outgroups than German-language respondents in Germany and Austria? In their 1997 study of organizational cultures in 43 countries, Trompenaars and Hampden-Turner found that Germans and Austrians belonged to a cluster of so-called 'neutral' cultures, while Italy was an example of a so-called 'emotional' culture. Expressing emotions is less appropriate in Germanic cultures, while it is viewed positively in Italy, for instance. Such a difference may also come into play when respondents are asked about their sentiment towards refugees, even though Trompenaars' and Hampden-Turner's findings primarily pertained to business relationships.

Italians may also view immigrants in a more favorable light because in many cases they have actually met them (not to mention the fact that historically Italy is an emigration country), both in positive and negative contexts, including on the local news: migrants that drowned trying to cross the Mediterranean, towns, villages and at least one well-known island confronted with huge influxes of refugees and asylum seekers, etc. Such direct or indirect contacts may inform more positive opinions, while for the other countries under study some aspects of the crisis remained a distant concern, even though they also took in immigrants.

While emotion scores for Italy may be explained by cultural factors (a certain emotionality that should not be overstated), assessing those of our Hungarian sample may require a more political outlook since Hungarians score relatively high on the negative emotions ('anger', 3.18 – second highest score after Italy; 'fear', 3.68 – highest score; and 'disgust', 2.88 – highest score) and low on the positive emotions ('hope', 2. 90 – lowest score; 'happiness', 2.40 – lowest score; and 'sympathy', 3.70 – medium score, same as Germany.) These scores are in line with Hungary’s anti-immigration stance.

With the Italian sample scoring highest on the positive emotions and the Hungarian sample scoring highest on the negative emotions, it logically follows that the scores from Germany and Austria must be found in the middle. While the actual figures are not that different, emotions towards immigrants are more negative in Austria. The Germans are ahead of the Austrians regarding positive emotions 'hope' (3.49 versus 3.34), 'sympathy' (3.70 versus 3.47), and 'happiness' (3.26 versus 3.04), and behind them regarding negative emotions 'anger' (2.86 versus 2.94), 'fear' (3.35 versus 3.37), and 'disgust' (2.55 versus 2.62). In the case of 'happiness' it should be mentioned that the German sample scores higher than the Italian one

Our study shows that in the four countries surveyed sentiment towards migrants varies widely, which means that no 'one size fits all' policy is possible. There is a need for creative policymaking in tune with local sensitivities, in other words (Fargues, 2015). The OPPORTUNITIES project aims to set a 'level telling field' where all views can be heard—but national sensitivities vary widely, a fact that must fully be taken into account. Research shows that the greater the number of migrants in a Western country, the better the acceptance in that country (Gonnot, Dražnova & Bumori, 2020). Yet the paths towards acceptance and integration may differ from one country to the next. As a result, 'European solidarity' (Di Salvo & Barnlund, 2020) in developing coherent migration and integration policies may be a noble goal, but for such a plan to be successful the various national contexts need to be taken into account (cf. d’Haenens, Joris & Heinderyckx, 2019).

Vidra, Z. & Fox J. (2012). The Radicalization of Media Discourse. The Rise of the Extreme Right in Hungary and the Roma Question. Budapest: CEU, Center for Policy Studies.